In our track by Track feature, artists guide listeners through each track on their latest release. Here, Terror discuss their new Todd Jones-produced album Pain into Power.

Los Angeles hardcore vets Terror have returned with a new album, Pain into Power. The LP is out now, and the band offered up a track-by-track breakdown exclusively for Heavy Consequence.

For Pain into Power, Terror reunited with founding guitarist and Nails leader Todd Jones, who produced the new record and brought along the massive sound his projects are known for. Singles “Can’t Help but Hate” — featuring a notable guest appearance from George “Corpsegrinder” Fisher — and “Boundless Contempt” built the hype, melding the band’s inherent vitriol with crushingly robust tone. The rest of the record follows suit.

We caught up with vocalist Scott Vogel, who offered some insight into the creative process of each track and reuniting with Jones.

Stream the album and read the full rundown below.

“Pain into Power”
The title track from our record was the first completed song we wrote for the album. Todd advised we write a song inspired by the fact that Terror has been a band for 20 years and we’re still thriving. Doing anything consistently for 20 years, there’s a lot of ups/downs, but with the help of our friends and close partners, we’ve been fortunate that we’ve gotten through it all and we’re still here, loving what we do . “You turned your pain into power” to me is a summary of persistence and perseverance. Through our travels we’ve met so many people that have shared stories about coming from the dirt, pulling themselves up out of hard times, and making a better life for themselves. This is for them. This is for you. This is for the worldwide TERROR CREW. TRIED AND TRUE. STILL DEDICATED TO HARDCORE.

“Unashamed”
The idea for the music of ‘Unashamed’ was born out of a demo Link submitted that we loved. Todd and [drummer] Nick [Jett] worked out the breakdown, maybe the heaviest on the record…? Todd envisioned a repeating line over the breakdown. Lyrically this song is pretty personal. An old time friend of mine out of nowhere decided they had some sort of an issue with me and through back channels they were trashing me to anyone who would listen — except me. I had no idea why or where this was coming from. I didn’t understand it. On a human level, it really hurt. I wish they would’ve come to me to chat it over and we hopefully could’ve come to some common ground. Going over in my head what could’ve caused their outbursts, I realized I was trying to rationalize someone else’s irrational thoughts. If I continued to dwell I would’ve gone in circles and not made any progress and driven myself angry and for no positive outcome.

To this day I still have no idea what is the source of their grievance, but what I do know, is that I’m proud of the person I am. I’m proud of the relationships I’ve made in this world. I’m proud to be surrounded by joyous souls who want to share good/positive experiences together. I’m proud of Terror. I’ve done things that have affected myself and possibly others in a negative way. I learn from my mistakes and move forward. I’m human. But I’m not going to put my head in the sand and let life pass me by because of someones negative perspective of who or what they think I am. Unshamed of the choices I’ve made.

“Boundless Contempt”
Across the members of Terror and Todd this is one of the favorites on the album. Musically it’s one of the angrier tracks on the record and I wanted the lyrics to match up with the intensity of the music. When you or someone you know gets violated, the emotion felt is to immediately control the situation, to help push down the hurt. And just as much to attack the aggressor. Repercussions aren’t thought of. Just revenge and the need to inflict and return the pain that you feel. When putting this song together, Todd was adamant about having a build-up with the drum toms pounding and the bass following, as he stated: “It’s going to be hard.” I love the use of double bass in this song. We did not use a lot of double bass on this album, but this breakdown calls for it. Love this one.

“Outside the Lies”
“We live our lives outside the lies.” We made this record in Los Angeles during the height of COVID. With our members being spread across the USA and with the uncertainty of traveling, unfortunately we all couldn’t be at writing rehearsals together so everyone would record their ideas/riffs, send them to LA, and we would pick out the stuff that made us feel good. Jordan [guitarist Jordan Posner] had established a cache of music he was working on and this song came from those demos. This song sounds to me like it could’ve been included on the No Warning 7″. Sort of a throwback to the 2001 era of hardcore. This song is about self confidence. Establishing and believing in yourself through your actions. No matter what any critics say. Live outside their bullshit and don’t ever let them in your head. Don’t ever let them have control.

“One Thousand Lies”
I told Todd I needed something a bit groove oriented and him, Nick, and myself put this one together. While writing the lyrics, Todd had the idea to throw in a tie-in to my old band Despair, particularly the song “One Thousand Cries.” There’s been a few instances in Terror where I’ve given tribute to some of my old stuff. For instance, Buried Alive has a song called “My Sacrifice” which I used a line from for the Terror tune “What I Despise”; there’s a couple others out there. Todd wanted to do this for the diehards. We all grew up studying the liner-notes + lyrics for all the albums we bought, and when I would see bands I liked do this, I really enjoyed it. It was like finding an easter egg. Todd really loved the breakdown on this one. It hits heavy and has a hard groove. 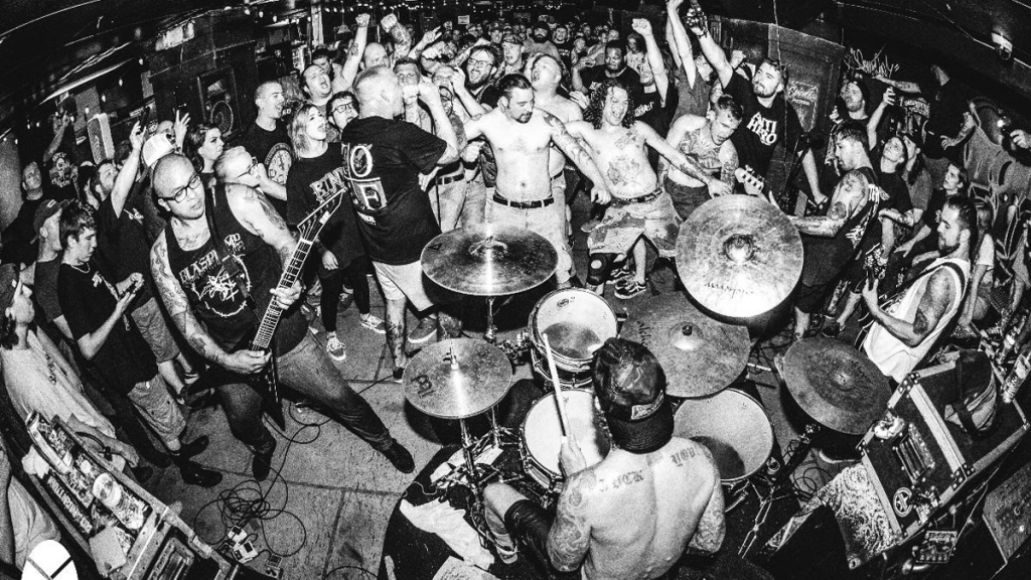 “Can’t Let It Go”
Todd and Nick brought this song in. As the record was being written, we got somewhere to the middle of the process, and Todd noted that everything was coming out really hard and heavy — sort of chunky — and we needed something fast/cutting to help with the flow of the album. Todd said he wanted to do something similar to the spirit of Carry On. In the middle of writing this song, when the mosh kicked in, Martin said, “I like that.” So I knew we were headed in the right direction on this one.

“Can’t Help but Hate”
One of our favorites on the record. Prior to working on the album, I had a list of potential song names for song ideas and Todd grasped onto this one. The opening riff was from Jordo’s demos. I heard it and knew I wanted it to start the song. Classic Jordo riff. To fill out the rest of the song, I instantly was reminded of the band Brotherhood (RIP Ron Gaurdipee) and their song “The Deal.” I wanted something with that feeling similar of urgency. Todd listened to my ideas, said “OK, I think I know what to do,” came to next rehearsal; Nick and Todd bashed it out. Todd said he wanted a ‘call-and-response’ styled vocal on the chorus. This song came together pretty quickly. This song crushes so hard. The idea of ​​getting George “Corpsegrinder” Fisher from Cannibal Corpse on it instantly came to mind. Everybody agreed we should ask him to feature on the song, and he obliged. A known fact about Corpsegrinder is that he loves hardcore. He loves WarZone, he loves Gorilla Biscuits. We felt this pairing made sense and we’re very grateful he took time and put effort into being on our album. I hope we get to meet up with George at a Terror gig and we do the song together. Fingers crossed!

“The Hardest Truth”
Todd brought the raw idea for this song into rehearsal and we all worked on it. This is one of the songs that took us a while to put together. There’s a few different versions we wrote with different parts and such but really happy with how this came out. I wrote the lyric “Together Through The Hardest Truth” and Todd wanted to put it in two songs, which gives off a sort of theme to the record. One of those things that you’ll catch if you really pay attention. I love seeing stuff like that in records that I’m a fan of.

“On the Verge of Violence”
Similar to “Can’t Help But Hate,” this is an idea for a song title I had written down that Todd grasped onto, came to rehearsal, and Nick and Todd put this together pretty quickly. Nick and Todd would jam on a lot of stuff. Seeing them work together is really cool. They have a strong connection when they play together. There’s probably 3/4 of another album worth of material that they played on together that didn’t get used on the LP. But the mosh from this song came from one of the more punk sounding things they did together. Given that we’re a band that has nine albums (!!!!), making setlists can often be challenging in the way that we generally have time allowance to play 10-15 songs. While making an album, you never really know what songs are going to stand out with the audience and I’m hoping folks take to this song.

“Prepare for the Worst”
“Prepare for the Worst” is another one that came from Jordo’s cache of demos. This song was written pretty early on in the process, probably the second song we wrote for the album. I’m glad the album closes with this spirit. There’s a lot of ways to approach closing an album. Do something slow, something melodic, do something earnest, etc. The mission of the record from Day 1 was to make something extremely focused on angry hardcore and this fit the bill for me. Taking it back to the airy slow intro of the track, this comes from January 2003. We were doing a tour with Throwdown, Death Threat, The Promise, and A Death for Every Sin. We had this intro that we only played on that tour and never recorded. Bridge 9 Records filmed and released footage from this tour recorded at The Showcase Theater in Corona. At that point I remember Todd telling me it was one of his dreams to play an explosive show at the Showcase, and after the show, Todd was really stoked that he was able to accomplish that. While writing this record, Todd texted me a YouTube link of that show and us opening with this intro. Had to put it on the record.

Thanks to Scott Vogel the thoughtful analysis. You can pick up Pain into Power via Pure Noise Records and snag tickets for the band’s spring US tour via Ticketmaster.