Today’s guest post has been written by organist Alex Robson, who studies the piano with me. Alex is currently Organ Scholar at St. Andrews. George’s Chapel, Windsor Castle, and, in September, he will become an organ scholar at St. John’s College at Cambridge University. This past year has been an interesting musical journey for Alex, and, in this article, he lifts the lid on musical life at Windsor Castle.

Since September, I have been working as Organ Scholar at St George’s Chapel, Windsor Castle. It is a one-year residential position, usually for someone (like me) on a gap year preparing for university but also open to graduates. Like many organ students, I started the piano first at age 6. I don’t come from a musical background, so for the first few years it was just a hobby I enjoyed after school and in the holidays. When I went to secondary school, I was lucky enough to receive a grant for funded lessons, so at 12 I began to learn the organ. It wasn’t until thinking about higher education that I had really considered pursuing the organ as my first instrument, but I decided to apply for an organ scholarship at Cambridge and was offered a deferred place at St John’s College. It’s normal to take a gap year before the more intensive scholarships, so I had already been preparing for one. The audition for the post at St George’s was the week after the organ trials for Cambridge, so I had a busy month before having a clear plan for the next 4 years of my life. While it all happened quite quickly, I haven’t looked back and it’s been great to have a year to focus purely on music performance.

I’ve had an incredible time in Windsor so far, and this year has been particularly unique for three reasons: firstly, all the major events have returned in full force as the country recovers from the pandemic, and services which had been postponed have been able to go ahead; this has led to an especially busy year and there’s always something to prepare for. Secondly, because of the Platinum Jubilee, there have been a lot of events around Windsor and in the chapel itself. Finally, in January the choir announced he would accept girl choristers as well as boys into the choir. Although most cathedrals have girls’ choirs, very few have a mixed treble line and so it has been very exciting being present for the start of this new chapter!

My main job is to accompany some of the 8 services sung each week in the chapel. I share this with the Assistant Director of Music, Luke Bond, and roughly once a fortnight I have the privilege of the Lay Clerks (adult singers of the choir) at evenings. I’m very fortunate to have access to the chapel organ to practice throughout the day, and it’s very helpful – one of the big challenges as an organist is the sheer volume of music you have to play, and every minute of practice counts. To add to this, each organ is unique in size, shape and layout, so there are elements of performance which can only be prepared on that specific instrument. The most memorable moments for me so far have been the first Sunday eucharist which I conducted, the recordings which the choir has made, and the Royal Maundy service (a ceremony of almsgiving by the monarch, although this year Prince Charles represented the Queen). The history and beauty of the buildings is always there, but on special occasions it almost comes to life and there’s a real sense of connection to these elaborate and long-lasting traditions which the chapel was built for. Playing in the presence of royalty somehow feels very unique and it’s an incredible opportunity to have on a gap year.

As well as this, I help to teach the probationers (younger choristers in Years 4 and 5) every morning and organize the music library. At the start of the summer, we welcomed the first two girls in Year 4 and I’ve really enjoyed the challenge of teaching a group where some students have more experience than others and it’s been great to see all of them be so enthusiastic and committed to the music. As for the library, it’s a surprisingly daunting task; For each service, the choir uses around 100 copies which have to be organized and filed. There’s definitely a lot of organization involved, but it makes a nice contrast to the musical elements of my role. Seeing all the planning and preparation–particularly for recordings, the Jubilee broadcasts and major services–has been fascinating and there are so many little details which help everything to run smoothly on the day.

The organ is a unique instrument for many reasons, but personally I think the biggest factor is the size and location. This is partly why it’s not so popular now – being tied so closely to the church or large concert halls can make it difficult to practice and perform, and there is still a huge gender imbalance in the world of organ and church music. However, progress is being made – St John’s College, Cambridge; Chichester; Hereford and St Paul’s Cathedrals have all announced they will admit girls to their choirs, and Stainer & Bell published a 3-volume anthology of sacred music by women composers in 2019-2020, which has proven very popular. The Society of Women Organists continues to redress the gender imbalance, and many concert organists who are bringing the instrument to a wider audience such as James McVinnie, Katelyn Emerson and Anna Lapwood. The traditional route for many British organizations’ training has been in Oxbridge collegiate choirs, but there are also flourishing programs at conservatoires, and other universities such as Royal Holloway and Bristol have great opportunities for organ students as well.

I believe the organ deserves a place in the future of music, and it’s a very exciting time for the instrument. I’ve had a wonderful experience here at St George’s Chapel, and going on to university will present a different set of challenges but I couldn’t have asked for better preparation. It is a real privilege to work here, and it has definitely inspired me to continue on my journey to become a professional musician. 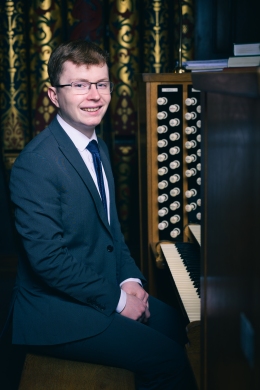 For much more information about how to practice piano repertoire, take a look at my piano course, Play it again: PIANO (published by Schott Music). Covering a huge array of styles and genres, the course features a large collection of progressive, graded piano repertoire from approximately Grade 1 to advanced diploma level, with copious practice tips for every piece. A convenient and beneficial course for students of any age, with or without a teacher, and it can also be used alongside piano examination syllabuses too.

You can find out more about my other piano publications and compositions here.